Pam Emmer likes to say she came to Los Angeles with big plans and high hopes. Hers had nothing to do with fame or stardom, though.

"People go to Hollywood for all kinds of dreams," says Emmer, who lives in Iowa most of the year and spends part of the year in Florida. "I went to Hollywood, and my dream was to get well."

Before she could be cured, she had to know what was wrong. Finding out was a 5-year effort that started near her Midwest home and eventually brought her to Cedars-Sinai.

She has intolerances to dairy and fructose, a common sweetener found naturally in fruit, which troubled her as a child and then more severely as an adult. Then, in her 60s, she developed a new set of symptoms: nausea, abdominal pain, bloating, no appetite and fatigue. She felt so ill during these episodes that on more than one occasion she would be on her way to the airport for a trip and have to cancel.

Her doctors believed she had intermittent, non-alcoholic pancreatitis, which caused episodes of pain and nausea that would be unbearable one day and gone the next.

She changed her diet. She tried medications. She had a "zillion" tests. She felt sick all the time. Adding to the pain, her doctor in Iowa told her they could find nothing to explain these painful, fleeting episodes.

"They were days of pain, tears and many fears," she says. "What's going on in my body? Why can't I eat anything?"

Pam didn't believe that there was nothing wrong. Her symptoms were painful and real. She kept seeking help—and she was willing to travel. Eventually, a specialist in Georgia diagnosed her with small intestine bacterial overgrowth (SIBO). The disease is just what it sounds like—too much bacteria growing in the gut. It causes a wide range of problems, including Pam's symptoms, as well as malnutrition and weight loss as the bacteria blocks the body from properly absorbing food.

Read: Taking Back Control of Her Life

She hoped relief would be on the way now that she had a name for her problem. Unfortunately, the treatment she received didn't work. She was back in the cycle of feeling sick all the time and not having any answers for why.

She started researching SIBO on her own, and found the work of Mark Pimentel, MD, executive director of the Medically Associated Science and Technology Program at Cedars-Sinai. He's a leading expert on SIBO, irritable bowel syndrome (IBS) and how bacteria affects the gut—and how to address those diseases successfully. 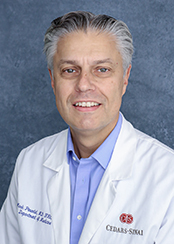 She started following him on Twitter. She became something of a fan, able to rattle off some of his greatest research hits (first blood test to diagnose IBS, role food poisoning plays in GI diseases) the way others name songs from their favorite rock band.

So, she headed west to Hollywood, hoping Pimentel would be able to help.

"After 5 years of being sick, and numerous doctors being dismissive of my problems, I felt that was the only place for me to go," she says.

The SIBO was simple enough to address. Pimentel confirmed her diagnosis after an examination and additional tests. A combination of antibiotics she hadn't tried before cleared the SIBO. "A one-and-done" treatment, Pam says.

Read: Healthy Bowel Movements: Why You Should Pay Attention to Your Poop

But, that wasn't her only problem.

Something about the pancreatitis diagnosis—which had been blamed for some of her symptoms—seemed off to Pimentel, so he referred her to his colleague Laith Jamil, MD, for an endoscopy.

The hunch was correct. Tiny crystals were discovered in her bile, a very rare condition. It slowed down her motility, and sometimes blocked her pancreatic duct, causing her painful symptoms. The solution was to remove her gallbladder.

Recovery from surgery took time, but the treatment cleared her of the symptoms once attributed to pancreatitis. On Twitter, she touts herself as SIBO-free.